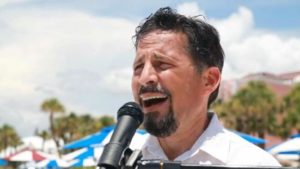 I was born to a Musician and an Artist. My father played piano and come from musical family where everyone played at least one instrument – trumpet, guitar, violin, saxaphone, or piano.

My mother wrote prose and painted. After I was born, they were so delighted, they decided to have four more children- Steve, Billy, Nina, and John. They believed in being fruitful and multiplying. I have six children – three boys and three girls – Jeremy, Jacob, Natalie, Joey, Serafina, and Hannah. I also believe in being fruitful and multiplying.

When I was five years old I was introduced to Baby. When I saw the piano I was immediately taken. Finally, after almost two years of begging, my dad agreed to allow me to study music with Mr. Joseph Amella. At the age of 13 years old I played my first wedding and have performed for over 1000 weddings since then.

At the age of 18 years old I borrowed Three thousand dollars from Tony Serritella, a neighborhood philanthropist and bought into a partnership Just Pianos. We tuned, rebuilt, and sold pianos.

A few years later I received a scholarship, to study as a performance major at the Chicago Musical College of Roosevelt University.

After studying at Roosevelt I started trading Options on Stocks, Bonds, and Currencies. On the weekends, I played the piano and DeeJayed at Ameritune for a friend I met in College, Al Mitchell. While trading options, I met a friend, Chuck Cottle who offered to finance my chance at making it in the pop music scene. After writing for Chuck, I picked up a part-time job at a Jingle House in Chicago, called TMK/Elias.

I came to know the Lord (Got Saved) when I was 25 years old. I was married and had three children – Jeremy, Jacob, and Natalie. About ten years later I was divorced and moved to Florida to live with my brother Steve or better known as Fritz. He got saved shortly after me.

Fritz is Entertainer Extraordinaire. He rides a six-foot Unicycle, Juggles, Walks a big ball, Plays the Drums, Tuba, Cowbells, He’s a One-Man Circus. He is also an actor and has been in many commercials. (Let’s just say he has a little more energy than I do.) My other brother Billy is a writer and has at least four published books, that I know of. My sister, perhaps the greatest of artists, works with a medium called food, brother John is an artist and writer. He spends six months out of the year teaching art in Africa and ministering to young children in the area.

While I lived with Fritz, I met my beautiful wife, Mimzy. She’s an artist. She can do anything. She can work with any medium. The only thing she doesn’t do is play the piano (thank God).

I married my love and started playing the piano everywhere. I also started DeeJaying too. In the following ten years, I had three more children – Joey, Serafina, and Hannah. I was playing over 400 times a year.

In 2011, I conceived the idea – Baby Grand in the Sand, and have a goal of playing for at least 100 weddings each year. Once a week was playing at Seasons 52 and the Bank of America Building in Tampa, Dukes in Springhill, and at my church at Northwest Tampa Church of God.

My beautiful wife Mimzy is an artist who can work with any medium. The only thing she doesn’t do is play the piano (thank God).

I’m looking forward to working with you.
Contact Me